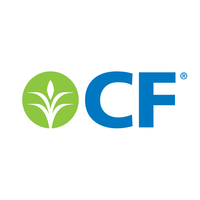 Sign up for CF Industries Holdings Inc and we'll email you the dividend information when they declare.

Your account is set up to receive CF Industries Holdings Inc notifications.

CF Industries Holdings, Inc., incorporated on April 15, 2005, is a manufacturer and distributor of nitrogen fertilizer, and other nitrogen products. The Company's nitrogen fertilizer products are ammonia, granular urea, urea ammonium nitrate solution (UAN) and ammonium nitrate (AN). Its other nitrogen products include diesel exhaust fluid (DEF), urea liquor, nitric acid and aqua ammonia, which are sold primarily to the Company's industrial customers, and compound fertilizer products (nitrogen, phosphorus and potassium or NPKs). The Company's segments include ammonia, granular urea, UAN, AN and other.

The Company's Other segment includes DEF, urea liquor, nitric acid and NPKs. DEF is an aqueous urea solution typically made with 32.5% high-purity urea and 67.5% deionized water. Urea liquor is a liquid product that the Company sells in concentrations of 40%, 50% and 70% urea as a chemical intermediate. Nitric acid is a nitrogen-based product with a nitrogen content of 22.2%. Compound fertilizer products (NPKs) are solid granular fertilizer products for which the nutrient content is a combination of nitrogen, phosphorus and potassium.