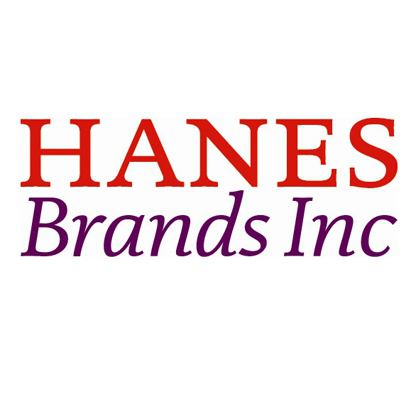 Enter the number of Hanesbrands Inc shares you hold and we'll calculate your dividend payments:

Sign up for Hanesbrands Inc and we'll email you the dividend information when they declare.

Add Hanesbrands Inc to receive free notifications when they declare their dividends.

Your account is set up to receive Hanesbrands Inc notifications.

The Innerwear segment focuses on core apparel products, such as intimate apparel, men's underwear, women's panties, children's underwear, socks and hosiery. The Company operates in the United States through its Hanes, Maidenform, Bali, Playtex, JMS/Just My Size, L'eggs, Donna Karan and DKNY brands, and the Company is also a manufacturer and marketer of men's underwear and children's underwear in the United States under the Hanes, Champion and Polo Ralph Lauren brands, and women's sheer hosiery under the L'eggs, Hanes, Maidenform, JMS/Just My Size, Donna Karan and DKNY brands.

The Company operates in the activewear market through its Champion, Hanes and JMS/Just My Size brands, where the Company sells products, such as t-shirts and fleece to both retailers and wholesalers. In addition to activewear for men and women, Champion provides uniforms for athletic programs and includes an apparel program, C9 Champion, at Target stores. The Company also licenses its Champion name for footwear and sports accessories. In its branded printwear category, the Company supplies its t-shirts, sport shirts and fleece products, including brands, such as Hanes, Champion and Hanes Beefy-T, to customers, primarily wholesalers, who then resell to screen printers and embellishers. The Company sells licensed logo apparel in the mass retail channel and in collegiate bookstores and other channels under its Gear for Sports and Champion brands. The Company also sells licensed collegiate logo apparel primarily in the mass retail channel under its Knights Apparel brand. The Company also offers a range of clothing for men, women and children marketed under the Hanes and JMS/Just My Size brands. The JMS/Just My Size brand offers casual apparel designed to meet the needs of plus-size women.

Sector
Personal Goods
Country
United States
Share Price
$8.12 (yesterday's closing price)
Shares in Issue
349 million
Market Cap
$2.8bn
Dividend Cover

How many times is the dividend covered by company income. A cover of 1 means all income is paid out in dividends
2.8
CADI

The Consecutive Annual Dividend Increases - the number of years this company has been increasing its dividends
0
Market Indices
none