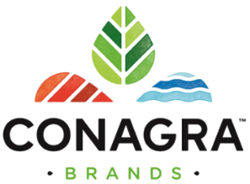 Enter the number of Conagra Brands Inc shares you hold and we'll calculate your dividend payments:

Sign up for Conagra Brands Inc and we'll email you the dividend information when they declare.

Add Conagra Brands Inc to receive free notifications when they declare their dividends.

Your account is set up to receive Conagra Brands Inc notifications.

The Company's Commercial Foods segment includes commercially branded food, which are sold to commercial, foodservice, restaurant, food manufacturing and industrial customers. The segment's primary food items include a range of vegetable, spice and frozen bakery goods, which are sold under brands, such as Spicetec Flavors & Seasonings. The Company under the Commercial Foods segment has operations in Omaha, Nebraska; Eagle, Idaho; North Liberty, Iowa, and Tri-Cities, Washington. It also operates in China, Japan, the Netherlands and Singapore.