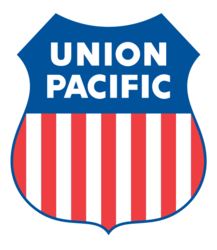 Enter the number of Union Pacific Corp. shares you hold and we'll calculate your dividend payments:

Sign up for Union Pacific Corp. and we'll email you the dividend information when they declare.

Add Union Pacific Corp. to receive free notifications when they declare their dividends.

Your account is set up to receive Union Pacific Corp. notifications.

Union Pacific Corporation, incorporated on February 3, 1969, is a railroad operating company in the United States. The Company operates through its principal operating company, Union Pacific Railroad Company (UPRR). Its business mix includes Agricultural Products, Automotive, Chemicals, Coal, Industrial Products and Intermodal. As of December 31, 2016, its network included 32,070 route miles, linking Pacific Coast and Gulf Coast ports with the Midwest and Eastern United States gateways. As of December 31, 2016, the Company owned 26,053 miles and operated on the remainder pursuant to trackage rights or leases. It serves the western two-thirds of the country and maintains coordinated schedules with other rail carriers for the handling of freight to and from the Atlantic Coast, the Pacific Coast, the Southeast, the Southwest, Canada and Mexico. Export and import traffic is moved through Gulf Coast and Pacific Coast ports and across the Mexican and Canadian borders.

The Company accesses various grain markets, linking the Midwest and Western United States producing areas to export terminals in the Pacific Northwest and Gulf Coast ports, as well as Mexico. The Company also serves domestic markets, including grain processors, animal feeders and ethanol producers in the Midwest, West, South and Rocky Mountain states. As of December 31, 2016, Unit trains, which transported a single commodity between producers and export terminals or domestic markets, represented approximately 41% of its agricultural shipments.

The Company is an automotive carrier west of the Mississippi River. As of December 31, 2016, the Company operated or accessed over 40 vehicle distribution centers. As of December 31, 2016, its franchise served five vehicle assembly plants and connected to West Coast ports, all six Mexico gateways, and the Port of Houston to accommodate both import and export shipments. In addition to transporting finished vehicles, UPRR provides expedited handling of automotive parts in both boxcars and intermodal containers destined for Mexico, the United States and Canada.

The Company's franchise serves the chemical producing areas along the Gulf Coast. Its chemical franchise also accesses chemical producers in the Rocky Mountains and on the West Coast. The Company's chemical shipments include six categories: industrial chemicals, plastics, fertilizer, petroleum and liquid petroleum gases, crude oil and soda ash. These products move primarily to and from the Gulf Coast region. Fertilizer movements originate in the Gulf Coast region, the western United States and Canada (through interline access) for delivery to agricultural users in the Midwest, western United States, as well as abroad. Soda ash originates in southwestern Wyoming and California, destined for chemical and glass producing markets in North America and abroad.

The Company's network supports the transportation of coal, petroleum coke, and biomass to independent and regulated power companies and industrial facilities throughout the United States. Through interchange gateways and ports, UPRR's reach extends to eastern United States utilities, as well as to Mexico and other international destinations. Coal traffic originating in the Powder River Basin (PRB) area of Wyoming is a segment of the UPRR's coal business.